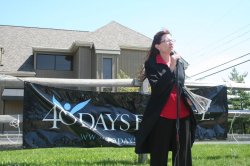 How can anyone get past what is already in the past? The only thing that defeats hate is forgiveness:

‘Then said Jesus, “Father, forgive them; for they know not what they do.” And they parted his raiment, and cast lots.’ Luke 23:34

I learned this 30 years after my abortion. That is way too long to hate my coercers and myself. I finally concluded that they really did not know what they were doing because all they saw was a ‘fix’ to a temporary problem…everyone involved had an agenda to take my unborn baby because it benefitted them. To them it was all about the money; it was cheaper to force me to abort than to buy diapers and formula. But for me, I get to keep a vivid memory of destroying an innocent Life.

God forced me to make a decision; accept and forgive OR hate. Once I accepted what happened and forgave, my future was placed before me.

Ministry is a hard thing but its reward is worth it. Ministry forces you to look inward all the time for everything. Every big or little thing that has happened to you is magnified so that you can see it now with spiritual eyes instead of the how the world sees it. Always remember that the world seeks to take your life, the Lord wants to give you Life eternal.

All that being said, the burden He gave me was obvious – to minister to women and men that are post-abortive AND to fight for the rights of the unborn in the Church and politically. God has given me a specific vision to go and spread this message of forgiveness, hope and love in His name.

Today, I am VICTORIOUS and post-abortive.