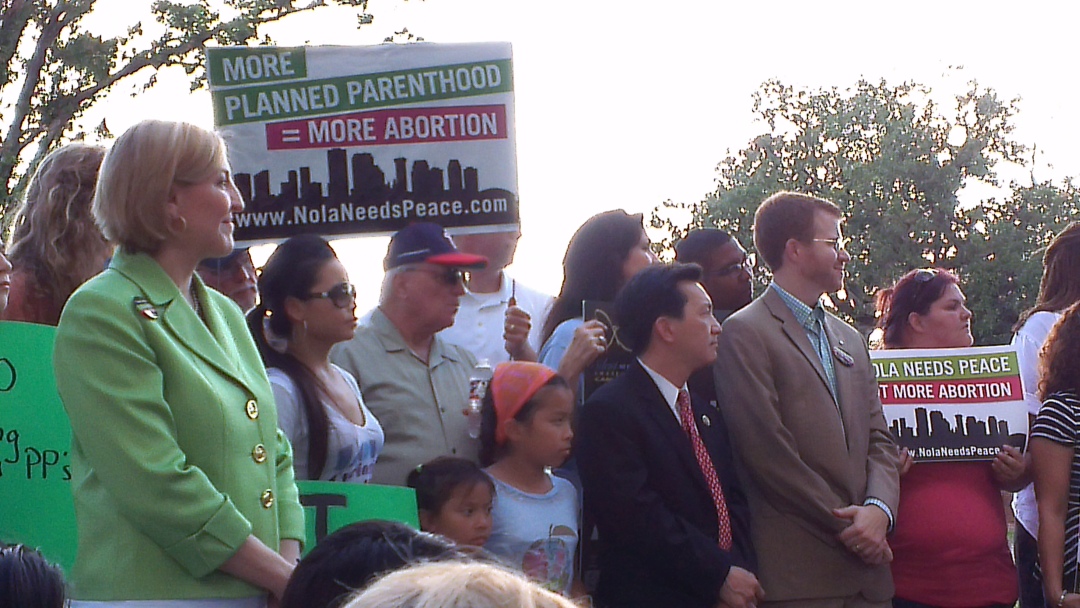 CONTRACTOR UPDATE: [5-7-14]”We received an awesome praise report this week! A company (subcontractor) that was working on the foundation of the new PP in New Orleans has completely pulled out of the project!  One of the workers for this company was a Christian, and while on the job, found out that he was working on the foundation for an abortion clinic.  My friend received a prayer request for this man, as he was distraught over what his company was building.  God supernaturally moved on the heart of the subcontractor, a Hindu, and he pulled his whole company off of the project (PP). ” h/t Elijah Ministries.

WOW!!! Now that’s a great big PRAISE THE LORD! God is changing hearts and minds about the abomination called abortion AND Planned Parenthood in New Orleans! These victories are because a diligent group of prolifers have purposed New Orleans in their hearts to save the unborn and to set the sinner FREE! They recognize that abortion is a SIN problem and a GOSPEL problem; pre-abortive women and men that hear the Gospel will reject abortion and accept Jesus Christ! Even the workers and contractors are pricked in their heart and have left the project or not take the job at all.

Abortion is a horrific evil that stains the great city of New Orleans! Be a part of the victory; please lay hands on this place on Claiborne Avenue and pray!

[5-6-14] Those of you that follow this ministry knows that I was in New Orleans for the NOLA Needs Peace Press Rally last year.

We had many reasons to go to New Orleans, but the foremost reason is the Vision God gave me in 2009 regarding New Orleans associated with this ministry AND we have four grandchildren there, three are women-to-be.

When I was there last May, the ceremonial ground-breaking took place at a unitarian church close to the proposed site. While most Christians KNOW that the unitarian church is a cult, a lot of people will see this ‘ground breaking’ to be a ground breaking between the Church and abortion. This cannot be tolerated: the Church, parachurches, ministries, and Christians need to show up to let New Orleans and Planned Parenthood know that the execution of unborn Louisianians is UNACCEPTABLE.

The future site of the new Planned Parenthood mega killing center is on Claiborne Avenue in the heart of New Orleans which was by design;  this is not incidental. This on a very well planned and convenient bus line that brings women in from all over the city. It is no mistake that New Orleans was chosen because of the close proximity of Mississippi which is nearly abortion facility free. This is marketing strategy to make money, not help women.

“[Archbishop] Aymond said the Archdiocese will boycott any person or business who plays a role in helping the Planned Parenthood facility to become a reality.” Read the Archbishop’s letter here. New Orleans is tight knit and sometimes tight lipped; but a boycott from an Archbishop in a Catholic dominated city can stop a freight train. Let’s pray it does.

You can help by clicking here for information to call contractors that are helping to build this killing center. Many other contractors backed out when business leaders spoke up.

Planned Parenthood fails women by purporting cheap birth control and abortion. If there is a ‘war on women’, it’s because Planned Parenthood demonstrates short-cutting who women truly are by making them subservient to the abortion & reproductive agenda.

God will have His way; He is petitioning Christians and non-Christians to heed His Word to stop this whether through prayer or deed or both.

My advice? SHOW UP AND BE HEARD. Planned Parenthood is showing up for Lobby Day 2014 at the Louisiana Capitol in Baton Rouge this Thursday, May 8th. This is YOUR chance to defend the unborn OUTLOUD at the State Capitol right in the face of evil!