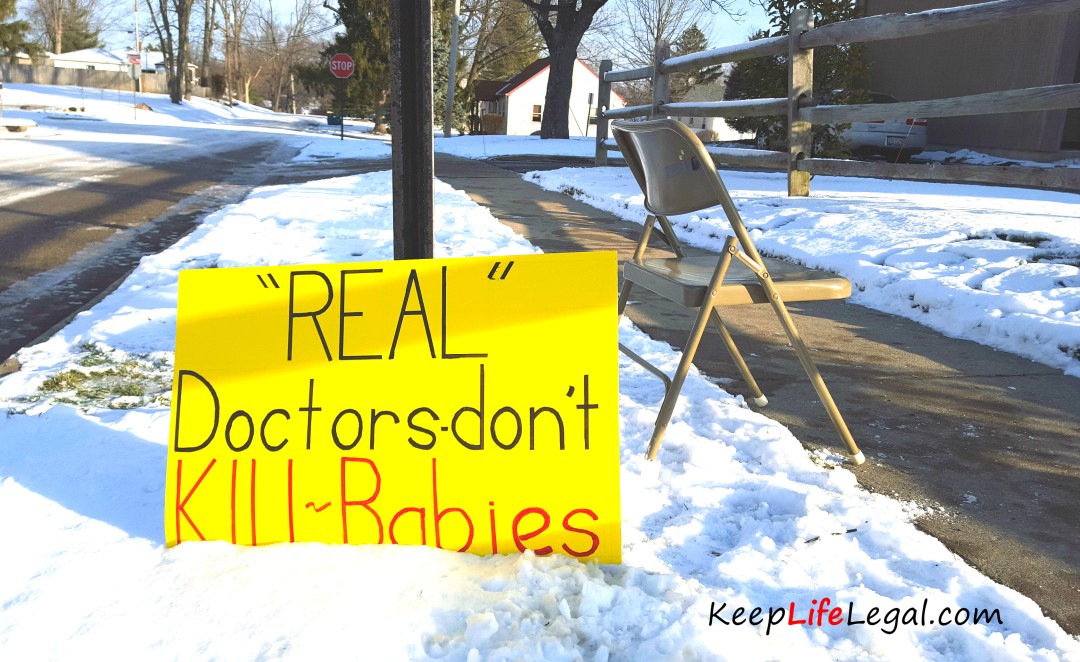 A chair sits empty on the prolife side of the sidewalk at the abortuary; it represents the lives of unborn children murdered at the hands of the ‘doctors’ and workers on the other side of the sidewalk. This lone abortuary in the photo below is responsible for tens of thousands of abortion deaths, up to 22 weeks.

There is an empty chairs national memorial representing 168 killed where the Oklahoma City bombing occurred. Many people and businesses have empty chairs or the table set for a lost soldier or first responder. Obama said he would have an empty chair at the State of the Union address for ‘victims of gun violence’. Senator Ted Cruz said on Twitter: “If I’m elected POTUS, there’ll be an empty seat for the over 50 million unborn children killed since Roe.”

“An estimated 32,000+ lives are lost each year due to guns. That figure contains homicides, suicides, accidents, etc. Tragic? Definitely. But consider this: per day there are approximately 3,000 lives taken by abortion. Per day. The death-by-way-of-guns figure for an entire year is surpassed in only 2 1/2 weeks by abortion deaths.” Read the rest here.

January is Sanctity of LIFE month and soon the March for Life. All over the United States and around the world there are empty chairs that can never be filled because of the abortion agenda. As taxpayers, we are forced to fund the agenda; as Christians, we are CALLED to continue the fight for LIFE for as long as it takes.

It is our prayer and hope that these empty chairs will be filled to overflowing with the lives of the unwanted and unplanned and imperfect.