Health of the mother. Life of the mother. Only 1%. ANY woman that believes partial-birth abortion is okay in ANY situation, TURN IN YOUR WOMAN CARD NOW because YOU are the REAL WAR ON WOMEN. 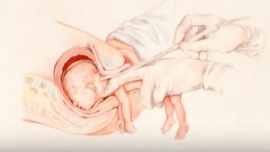 Here at our HQ, we are literally steps away from the monster that pioneered the partial-birth abortion procedure and taught to many other fledgling abortionists, even Kermit Gosnell. We see with our own eyes the business that has murdered thousands upon thousands of unborn children using any means necessary to kill. After all, abortion is a BUSINESS first, last, always.

“Two abortion physicians, one in Ohio and one in California, independently developed variations on the method by extracting the fetus intact. The Ohio physician, Martin Haskell, called his method ‘dilation and extraction,’ or D&X. It involved dilating the woman’s cervix, then pulling the fetus through it feet first until only the head remained inside. Using scissors or another sharp instrument, the head was then punctured, and the skull compressed, so it, too, could fit through the dilated cervix….Haskell has said that he devised his D&X procedure because he wanted to find a way to perform second-trimester abortions without an overnight hospital stay, because local hospitals did not permit most abortions after 18 weeks.” NPR, 2006.

What hero. And he has Hillary to thank for getting even more ignorant women to vote for it, and if you do, TURN IN YOUR WOMAN CARD NOW.

And since Hillary believes and said in the last debate that partial-birth abortion is okie dokie, and used her power in the Senate to keep the procedure ‘alive’, and as a woman you believe her? TURN IN YOUR WOMAN CARD NOW:

“But it’s important to me that people do understand that even if it’s only 1.9% or less of all cases sometimes it is a medical emergency…”

Then this ‘woman’ is saying that it’s okay to torture 1.9% of unborn babies IF it is a medical emergency? Here, let me fix stupid with the truth: Partial-birth abortion is used in bigger later term babies which  means the mom can deliver the child and can save both of their lives. This is SCIENCE, not even rocket science, which proves this is true:

“As an ob/gyn physician for 31 years there is no medical situation that requires aborting / killing the baby in the third trimester to “save the mother’s life.” Just deliver the baby by c/section and the baby has 95+% survival with readily available NICU care even at 28 weeks. C/section is quicker and safer than partial birth abortion for the mother.”  –Lawrence K. Koning, MD, FACOG

“With all that modern medicine has to offer, partial-birth abortions are not needed to save the life of the mother, and the procedure’s impact on a woman’s cervix can put future pregnancies at risk.” Former Surgeon General C. Everett Koop, M.D. Letter to the Editor The New York Times, September 26, 1996.

“Most partial-birth abortions are performed on healthy mothers with healthy babies,” and “there is no obstetrical situation that requires the willful destruction of a partially delivered baby to protect the life, health or future of a woman.” Nancy Romer, M.D., Curtis Cook, M.D., Pamela Smith, M.D. and Joseph DeCook, M.D. Letter to the Editor The Wall Street Journal, October 14, 1996 The Wall Street Journal, October 14, 1996.

The liberal bias regarding partial-birth abortion after the debate has been enormous. My email and feed lit up like a Christmas tree with how women NEED partial-birth abortion. Every liberal news outlet [CNN, ABC, NBC, CBS & basement dwelling Mother Jones, Vox, etc.] ‘reported’ on how wonderful partial-birth abortion is for the greater good. Babies that have to endure this heinous torture will end up in a red biohazard bucket and sent to a landfill while mommy is keeping warm with Hillary lies and rhetoric.

Babies don’t need abortion for any reason, so why do women need it? Any woman that says they need abortion to be an equal part of society, TURN IN YOUR WOMAN CARD NOW. And CONGRATS!!! You’ve just stepped into your ugliest man shoes. And they are HIDEOUS.