The New Roe of Texas

Well great. The illegal MINOR was ‘allowed’ to kill her baby in America. Sounds a bit off, eh? Yeah, you betcha.

Great test case, you say, and it is. I say we need proof this actually happened. Now, don’t go all ‘copy and paste what the crazy Christian said and post it everywhere’ garbage. Think about it…we are given NO information other than this new Roe is underage and illegally in the United States and AMERICANS got to pay for it. Fake news? Well, who would know with literally NO real information?

“The procedure was carried out after the U.S. Court of Appeals for the D.C. Circuit ruled Tuesday that Jane Doe, as she is identified in court filings, could immediately have the abortion she requested, and before the federal government could appeal the decision to the U.S. Supreme Court.” NICE way to circumvent the law. No harm, no foul? Oh, not so fast. Whoever allowed this undisclosed abortion to happen better go down in a blaze of liberal democrat glory since it only seems okay for proaborts to use the appeals PROCESS.

And, by the way, this abortion was NOT Illegal Roe’s Constitutional right, because this person, if there truly is one at all, is not a citizen and is STILL ILLEGAL AND A MINOR.

TEXAS: YOU HAD ONE JOB. And now with an abortion minded illegal minor’s foot in the door, America will now be the abortion destination of the freaking WORLD. After all, not even the LAW can stop this runaway freight train: “This ruling not only cost a life, it could pave the way for anyone outside the United States to unlawfully enter and obtain an abortion,”AG Ken Paxton said.”

Won’t be unlawful anymore, at least in the skewed lying eyes of the ACLU. But I digress. This abortion sideshow is not truly what this article is about.

Here’s to all the proaborts out there that high-fived OUT LOUD that this little girl is now a mother of a dead baby. Each and every one of you are despicable and responsible for this young girl now being post abortive. But that is what you all wanted! KILL THE BABY!!! After all, this is for women’s rights? HA! NOT EVEN CLOSE. This slight of proabort hand was to continue to promote your baby killing agenda, and now for every illegal ‘immigrant’ who never has the money to buy her own abortion.

Nice going! Another one in the bag, eh? Actually, in a red tub marked BIO HAZARD getting ready for a ride to the landfill. And the photo below kinda let the proabort cat out of the bag. 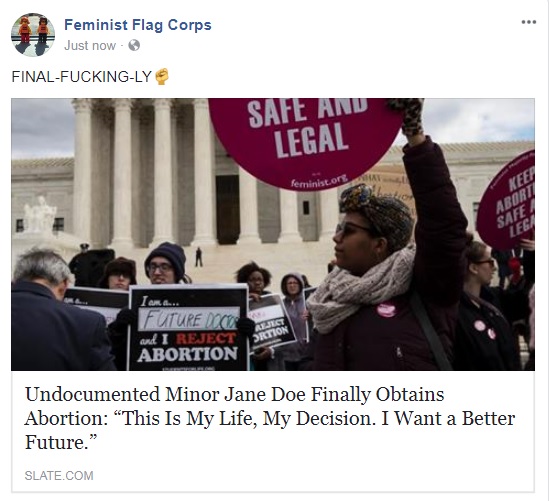