Gaslighting is a form of psychological abuse where a person or group makes someone question their sanity, perception of reality, or memories. People experiencing gaslighting often feel confused, anxious, and unable to trust themselves. [Medical News Today]

Gaslighting was used by Hitler when he wrote in Mein Kampf, “Hence today I believe that I am acting in accordance with the will of the Almighty Creator.” Of course he did not, but using this mental circus tactic, Hitler made his followers feel important for upholding what he wanted to do by using God as an influence. It took time and patience, but Hitler got it done and without much push-back, because dictators do not like push-back.

Don’t look surprised, MANY radical left-wing and moderate Dems use this propaganda and gaslighting tactic on Christians, conservatives, and Republicans to influence them into submission, away from their firmly held beliefs and truths. And these radical Democrats do not respond to push-back, it only makes their fake resolve stronger, gaslight harder, and somehow their followers fall in line.

“Detained Jewish Persons” were hauled by train in cattle cars with no heat or restrooms, no food or water, FOR DAYS until they reached the camps stinking of their own feces; some did not make it TO the camps alive. Do you really think they got on those cars voluntarily? Gaslighted Hitler followers, most of them “Christians”, helped put them on those cars by singing a little louder.

Hitler blamed the Jews for the loss of WW1. The holocaust was well thought out, did not just ‘happen’. It took many years of planning, gaslighting adults, grooming children. How else did they ‘suddenly’ have uniforms, staff, IDing and categorizing humans, railways, and HUGE detainment camps to house and kill Jewish people?

If WW2 had a different outcome, how much longer would the Third Reich had been able to run the camps to continue their super race agenda? Months? Years? DECADES???

The new ‘wall’ in DC was well thought out, did not just ‘happen’ to be available after the breach, after a stolen election. How often do we see A WALL with RAZOR WIRE suddenly appear just after a major rally? Today, there is evidence that the “wall” will be permanent perpetuating the beliefs of creating a radical superpower that will NOT concede to the Constitution, the law, or even God. They hate guns and walls unless it is to protect THEM.

Clinton and her handlers blamed Trump conservatives for the loss of the 2016 election, thus taking the reins back from radical left-wing Democrat, handing them back to the people. Of course the Trump administration during the 2020 election cycle had a different outcome, rife with voter fraud which paved the road to ‘reset’ a nation, A FORCED ‘new normal’ by Biden’s handlers. That ‘reset’ agenda is solely against God and the Constitution – as it is written – to force an outcome that will create a super race using abortion, genocide, gendercide, euthanasia, denying science as fact, made up mandates and ‘pandemics’, domestic terrorism, big tech suppression and elimination, forcing Americans to lose all of their fought for freedoms.

Will Biden just hand the keys over to FEMA and China?

For Millions, Our Steeples Are Smokestacks

Returning home from a recent business trip, I flew over the city purported to have more churches per square mile than any other in America. As I gazed down sleepily at the numberless steeples checkering the landscape and dimly pondered their equivocal significance, I was suddenly startled awake by a strange transformation occurring before my incredulous eyes: The spires of the church buildings had morphed into so many cruciform chimneys belching skyward an almost palpable, smoke-like darkness.

Only the darkness wasn’t smoke. What I saw ascending to heaven from each sanctuary was praise—the grotesquely incongruous praise of Christians worshiping a God they fancied demanded no remorse and no repentance for doing precious little to stop the extermination of the most vulnerable of His children.

But, effectively, we did forget the death camps. We let their equivalent be rebuilt in America’s 850 abortion clinics. We let the monstrously evil thing happen again, in spades. History has repeated itself by powers of 10. For where the Nazis had their 6 million victims, we have on our hands the blood of 60 million.

Not a day passes that I don’t ask myself, how, in the name of all that is holy, have we let this happen? How, from week to week, are we able to assemble in houses of worship and, with ostensibly clear consciences, preach and hear sermons and sing songs about the love of God, when we are so fantastically out of touch with what the love of God is all about? What happened to caring for “the least of these”? Where is our love for them?

I know, you’re weary of hearing the now-almost-emptied-of-meaning comparison to Hitler’s systematic extermination of those he considered untermenschen: the “less than humans.” Believe me, I’m weary of drawing the comparison. Not because it doesn’t fit; it does. But because it no longer produces outrage. Witnessing Christian apathy on abortion makes me wonder if Auschwitz enraged us not so much for the depth as for the novelty of its evil. After all, we weren’t accustomed in the 1940s to mass-produced, assembly-line murder. These days we are.

I say “we,” because it is we—Christians—who could bring about a swift end to the abortion holocaust if we really wanted to. But 40-plus years of deafening pulpit silence argues we don’t really want to.

Christians are quick to say they believe in the sanctity of life from conception to natural death, but most do little, practically, to incarnate that belief and help change ours from a culture of death to a culture of life. Most are pro-life in belief but not in action. Most do little to actually help abolish abortion.

Remarking on the failure of the church to do little more than deal with the effects of great evil after the fact, Dietrich Bonhoeffer said, “We are not simply to bandage the wounds of victims beneath the wheels of injustice, we are to drive a spoke into the wheel itself.”

If we were serious about ending abortion, we could easily drive a spoke into the wheels of the machinery that drives Christian apathy and inaction. I’ve outlined an embarrassingly simple One- Minute Strategy to End Abortion that I believe would work—if only pastors would implement it.

But many American pastors and churchgoers are more offended that responsibility and blame should be laid at their feet than that 3,500 babies a day are being put to death. This, by itself, ought to be a potent wake-up call that there is something horribly wrong with a Christianity more upset by what it considers unfair defamation and wrongly placed blame than it is by the mass extermination of its little neighbors.

But is the blame wrongly placed?

In common jurisprudence, when you have a duty to prevent the commission of a crime but fail to make the effort, you are complicit in its commission. You are what’s known as an accomplice. Christ’s brother Jamesput it this way: “The one who knows the right thing to do and does not do it, to him it is sin.” We know the right thing to do.

Yet we persist in being willing accomplices to the evil of our age. We could end our silence on abortion, but we don’t want to pay the price for standing up and speaking out on behalf of those who can’t defend themselves. We prefer an “abundant life” Christianity that includes all the blessings but none of the suffering Christ promised His followers they would face if they were true to Him.

We have become expert at devising reasons why we can’t make the abolition of abortion a church priority. So expert, in fact, that if every baby aborted in America were Jewish, we would be the pride of Hitler’s SS for sanctioning their obscene “final solution” with our steadfast refusal to oppose it. What a testimony.

As my plane touched down on familiar soil, I found myself haunted by the opening words of a contemporary Christian song. I recalled, with no little irony, that it had been the theme song of the recent Missions Conference at my church, my own dear church:

Suddenly, I was weeping bitterly for them.

But even more bitterly for the precious children.

Rolley Haggard is a feature writer for BreakPoint. [SOURCE]

Thanks you Rolley for another great article. Your insight in the holocaust of our time is incredible. Most people do not understand that hundreds, if not THOUSANDS, of churches surround abortion facilities in the United States and do nothing to stop the abortion apocalypse.  Press on, Brother! ~ Rev. Katherine

If you were born after 1973, CONGRATULATIONS! You made it out of the abortion holocaust ALIVE: 1 in 3 pregnancies end in abortion in the United States. 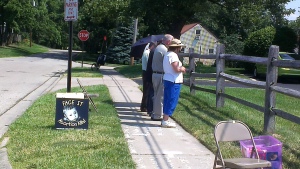 I love prolife week, and I HATE IT. Prolifers, advocates, activists and apologists need to have time to reflect, discern and prepare to do more for the unborn and the moms that murder them. I hate it because this just shouldn’t be; women were never to be baby killers but LIFE BEARERS.

The legacy of Death Roe was started by Texas attorneys seeking a name for themselves and found the perfect abortion customer: poor, unmarried, desperate. Sarah Weddington and Linda Coffee will be forever known as the ‘women’ that killed and continues to kill over 1.5 MILLION unborn children every year. These two opportunistic attorneys have made a baby murder legacy that squelches what Molech, King Herod and Adolph Hitler did. Abortion death legacy has left millions in utter despair – most post-abortive women regret their abortion(s).

Hypocritical Right to PRIVACY? The question is: Whose ‘right’ is it anyway? Burying Death Roe in the 14th Amendment was liberal slight-of-hand and decided the fate of unborn millions by taking their right to privacy and handing it over to the abortionist.

Lord, you are God of all. You created us and loved us. But we have sinned against you, Lord – and for that I ask You for forgiveness. Lord God, we have failed as a nation and as a people. We have given Molech our children instead of dedicating them to You for Your work – we have sacrificed for ourselves. We have sinned.

We have sanctified the world instead of You. For that I grieve. We have been disobedient and insolent. Precious Lord, bring us to a saving place that only You can provide. Lord, we know that Your provision means every blessing, including our children. I also know that through Your holy provision you gave us Jesus, the only sacrifice for sin and that You would never ask us to sacrifice our children.

Lord, keep Your Holy Word close to our hearts and minds that we would have an answer for every question. It is our intention to always seek You first and always.

And finally, Lord, I pray with great supplication that you will shut down this abortion facility in our city so that it would be a great example of what You will do when people pray. Let not the aborted children die in vain.

In Jesus precious name I pray, AMEN. Let it be DONE.

“Can a woman forget her nursing child, and not have compassion on the son of her womb? Surely they may forget, yet I will not forget you. See, I have inscribed you on the palms of My hands; your walls are continually before Me.” Isaiah 49:15-16

Jeremiah 1:5, “Before I formed you in the womb I knew you; Before you were born I sanctified you; I ordained you a prophet to the nations.”