And won an election he did not deserve. But did he win? Election fraud is RAMPANT in Georgia.

One woman we know was told she could NOT vote in the runoff because she already voted and the person in line in front of her said they told her the exact same thing. How many other people were told the same thing, who are republicans, and was NOT ALLOWED TO VOTE.

Another woman we know moved from Georgia to Florida YEARS ago. She received a letter in the mail IN FLORIDA that begged her to come back and vote in the presidential election. How many other people got that same letter and went BACK to Georgia to vote in a state they do not reside in? HOW MANY?

SO MANY. In fact, news sources said 2 MILLION people went to early voting in Georgia. Unheard of. Unbelievable. Not even believable.

All that being said, Rev. Dr. Calvin Butts III, senior pastor of the church that hosted Cuban dictator Fidel Castro in 1995 and also employed Rev. Raphael Warnock, has donated thousands of dollars to the “reverend’s” Senate campaign. Anyone ‘reverend’ or ‘pastor’ who supports a communist or socialist for any reason should NEVER be in public ministry. Read the rest here.

“Rev. Warnock, by being consistent through the years, even as he’s running for elected office, about his stance for reproductive freedom, (is) really creating an opportunity to shift the public narrative,” said Jackson. “Religious people can be pro-choice.” And the reason for that is because proaborts like Warnock believe in religion, not a personal relationship with Jesus Christ.

“A group of 25 Black pastors from Georgia and surrounding states has sent an open letter to Georgia Democratic Senate runoff candidate the Rev. Raphael Warnock asking him to reconsider his stance on abortion. …..The letter was critical of Warnock’s position on the issue, noting that abortion affects Black communities disproportionately and in their opinion, contradicts Christian teachings……”Abortion decimates Black communities, disrupts Black families and inflicts untold harm on Black women,” the pastors wrote. “Black women and Black families need your advocacy; they need your protection, and they need your support.” Abortionists and abortion supporters disproportionately targets black women who abort about FIVE TIMES more than white women. Read that letter here.

Or have you all forgotten I am an ordained minister JUST LIKE Warnock? Then why wouldn’t I have the same stance as he does? Because I know the Bible to be true in every written word, not just the parts I want to believe in, such as proabort ministers like Warnock. Warnock has an agenda, not a ministry. He is a fraud and a liar and a hater of women.

Warnock has been accused of child abuse and ran over his wife’s foot while escaping an argument.

So good going, Georgia. You’re about to get what you paid for.

Dr. King NEVER advocated for abortion, his niece ‪Alveda King‬ debunked that lie. So, today, when you see a bunch of ‪Planned Parenthood‬ or‪ NARAL‬ or ‪NOW‬ or ‪‎Religious Coalition for Reproductive Choice‬ or any other proabort propaganda to further their abortion agenda in MKL’s name, just know that Martin Luther King Jr. NEVER, NOT ONE TIME, ever promoted or accepted abortion for any reason.

Roe v. Wade was not law in 1968, the year that Dr. King was assassinated. So assuming that Dr. King was pro-abortion is just that, an assumption on the part of the abortion cartel and industry, “I come from a prolife legacy,” said Alveda King. See the video below. 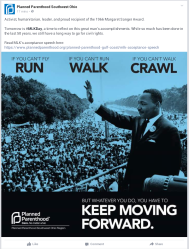 PLANNED PARENTHOOD, YOUR ARGUMENT IS INVALID: “Margaret Sanger was a racist and a significant figure in the eugenics movement, one of the ugliest social movements in our history,” Alveda wrote. “Neither of these things was widely known in the mid-sixties. Regardless, my uncle was wary about receiving the award from the moment he heard about it.” She explained that King never actually accepted the award. His wife accepted it for him. “His thank-you letter was very likely drafted by his secretary, who also had those leanings,” she told WND. “He just signed the letters at his desk. Those are things that people didn’t know.” Read the rest here.

“Minority women constitute only about 13% of the female population (age 15-44) in the United States, but they underwent approximately 36% of the abortions.” Statistically speaking, black women abort more than any other race. Simply do a internet search for your state’s Department of Health or latest abortion report.  Read the rest of Black Genocide here.

Dr. King had a dream, and a legacy. But it was NEVER about abortion. 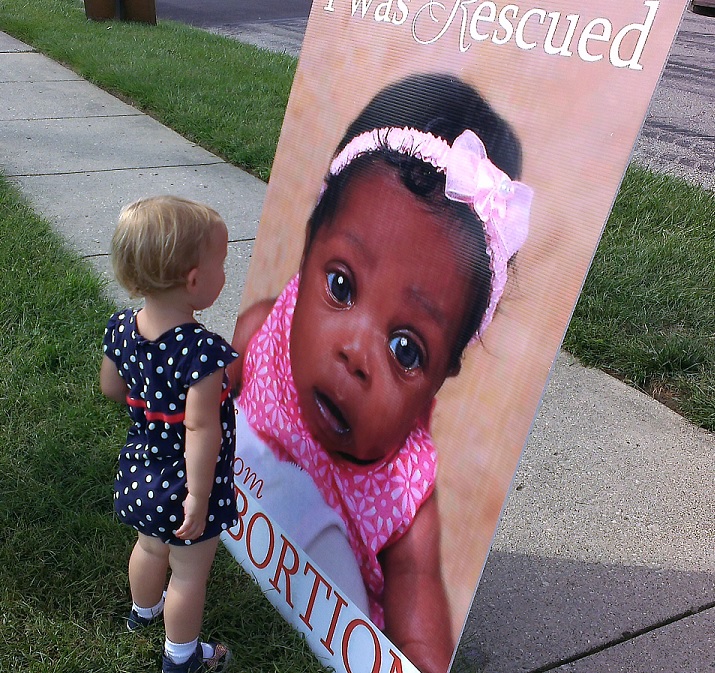 The total amount of Ohio abortions in 2013 WENT DOWN while Black abortions went UP. That means Black Ohioans abort more often than even Black Missourians; about 33% in Missouri. In fact, in Ohio the Black abortion rate went UP nearly a full percentage point.

Why are we killing our unborn Black children more often than Caucasians?

The abortion agenda has been prevalent for over 100 years. Margaret Sanger, the founder of Planned Parenthood, bought in to the eugenic/genocide agenda. She believed that minorities, the poor, disabled, the sick and afflicted to be ‘human weeds’ and targeted for removal through abortion and contraception.

The legend of Margaret Sanger is playing out in plain sight while Ferguson burns. And somehow the so-called #BlackLivesMatter movement has conveniently forgotten that they kill their own unborn at an alarming rate while mouring Michael Brown.

Some will argue that Michael was born and had a name…but so do the 55+ Millions dead from abortionm. In Jeremiah 1:5, God said that all lives were known BEFORE they were in their mother’s womb. Each child whether born, unborn, aborted and not yet known had a name, a purpose, a plan by God…none are forgotten by Him.

Then, the agument is void, every life matters, born and unborn.

This has gotten so out of hand that we have forgotten that there is a sin problem, not a cultural problem. Today there is protesting in cities all over America because of ‘Black Friday’. These protestors/demostrators say this is not civil disobedience but civil ‘unrest’. That’s a real nice name for doing whatever you want blatantly in the face of the LAW. How can this honor anyone?

What does this have to do with Black abortions? When you buy into the idea that killing an unborn child to be normal or accepted for any reason, then holding up expressways and shopping malls and ‘die-ins’ have no consequence to the offender.

Break the curse of Margaret Sanger – Be the change…because #UnbornBlackLivesMatter.

Today, my native city of St. Louis is under siege; one black man was shot dead by a police officer because he feared for his own life while on duty. The people of Ferguson and surrounding municipalities including St. Louis are looting, setting fires, rolling cars, etc., because of one person….ONE.

Since the day that Michael Brown died [Aug 9, 2014], another 981 Black Missourians have died; 9 per day, every day since then. These Black Missourians were unarmed, innocent, and had no ability to defend themselves and died in plain sight. But there is no outrage, no riots, not one protest.

So, while these rioters are trying to destroy my native city of St. Louis because of the death of ONE Black man, the rioters overlook the fact that just a couple of miles away at Planned Parenthood on Forest Park Avenue, another 109 Black babies have died since Michael Brown. That is 9 Black babies per day that are MURDERED in plain sight.

Why aren’t the rioters at Planned Parenthood defending themselves and their future generations? Why do they allow themselves to be essentially exterminated by abortion but riot over one?

Today I am appalled at the people of St. Louis, at the government of the city and state, for allowing people to die from abortion death EVERY DAY and have the audacity to be upset at the death of just one. St. Louis turns it head while thousands die every year. Appalled? No…I’m ASHAMED.

See the facts below. Links are included.