That should NEVER be a question nor the exception. EVERY Pastor should be preaching against abortion so much so that the church member should be able to preach the message themselves. Just as every Christian needs to know the plan of Salvation, they too should know the Message of LIFE.

The prolife world went crazy with a Pastor that actually preached against abortion – and while that is a great thing, why is it not normal or typical of the church? Why is this so rare that the entire prolife movement made this go viral?

I am not criticizing Matt Chandler’s message. Not at all. He had the guts to call out abortion in a mega church – not a small church where you know most of the members but a church system that has ‘campuses’. But because the 51 minute message is so taboo – even in the church – he took 12 minutes to ease the crowd with anecdotes of his family life, 20 minutes to say when life begins, and finally 22 minutes to say the word “ABORTION”. What this proves is that Pastors are FEARFUL of speaking out on the murder of innocent children in the womb. 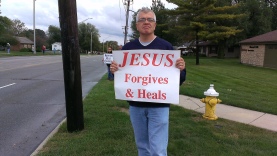 was offensive to them, maybe from a past abortion experience, but I don’t think that’s true anymore.  The real reason is that when you hear the Message of LIFE, you are now responsible to be diligent in all aspects of what God wants from us, to protect His immeasurable Creation, one unborn child at a time. Now, it’s on YOU.

Why are Pastors fearful of the Message of LIFE? Money. Agenda. Power. Money. Have Pastors shown favor to those that can lift them up rather than to the lost, the dying, the infirm:

“Who do we give this power to?” said Pastor Chandler regarding making some human beings not as important as others, much like how Nazi Germany and plantation owners did.

The Church has to stand in the Gap. There is no other way. Holding a sandwich just far enough from the homeless man to keep his attention is not the way to preach the Message; that only prolongs his hunger for the sandwich. The GOSPEL is what the lost and dying need, not bait.

PASTORS: If your church does not preach Life continually and does not have an active LIFE ministry, then you’re just playing church placating your own agenda. If you were a Doctor, would you tell the truth to your patient? Then why aren’t you doing the same for your own Church?

Your church is tolerating abortion if it is not actively preaching against abortion. The Church can’t have it both ways. Far too long have people assumed that the Church and all Christians are against abortion; while in theory they are, but not in action or deed.