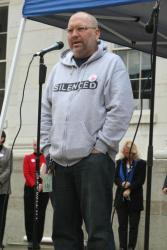 TERROR DOWN UNDER: A peaceful prolife ‘March for the Babies’ in Melbourne was attacked by social terrorists with filthy signs, physical onslaught and defiled themselves all for the ability to kill their offspring. Bryan Kemper was one of at least HUNDREDS of the 3+ thousand peaceful prolifers that was attacked by their local Prochoice Taliban. He sustained physical injuries while the local newspaper reported: “A Victoria Police spokeswoman said that no arrests were made and police had not received any reports of assault. I’d call that a blind eye approach. Can you possibly imagine what would happen if prolifers came to their meetings with vile threats, garbage throwing and physical attacks? Wait…that’s what the proposed buffer zones are for, so that they will not be confronted with the truth of LIFE. No buffer zone will keep the truth from the sidewalk. Ever.

TERROR AT THE STATEHOUSE: Prolifers and prochoicers battle everyday, either face to face or crouched behind their computer monitor. But battle they do, and yet over 4000 unborn children die each day in the United States, about 120,000 per day worldwide. When prochoicers have the unmitigated gall to fight to kill unborn children, they use terror tactics to try to subdue prolifers. I witnessed this in Austin this past summer. NOT ONE prolifer did one thing to antagonize or intimidate but hell broke loose every demon to terrorize peaceful prolifers, senate hearings and rallies. Interestingly, the prochoicers were paid, prolifers were CALLED.

TERROR ON THE SIDWALK: Anyone that would actually escort a woman to a place where her child will be murdered has surpassed the evil of the abortionist. When escorts can’t handle the truth of unborn life, they turn to terrorize prolifers and demand laws to take away the Constitutional right to FREE SPEECH. Buffer zones don’t protect anyone but they are illegal according to the Constitution of the United States WHICH our forefathers fought and DIED for. Abortion facilities do not need buffer zones; they need GOD.

Comments tell the tale of who uses terror tactics and intimidation:

“We write about the antis all of the time on our blog. We photograph them, take videos of them and recite things they say to clients.” ~ The Prochoice Sidewalk Taliban, or more commonly known as ‘escorts’.

Video? Photograph? Recite? REALLY! This is blatant intimidation from prochoicers and escorts. And BTW, you make us look rather good….we love it!

“They were throwing eggs and food-dye water balloons. Much more intense and violent this year than in the past.“ ~ from a witness of the attack on prolifers in Melbourne.

In Austin, those in orange were bringing in weapons, tampons and containers of feces and urine BESIDES circling and chanting at prolifers AND intimidation in the hearing rooms. I mean seriously….I was there to witness this side show of the Prochoice Taliban. I can well imagine what these people were doing to faithful prolife witnesses and their children in Melbourne.